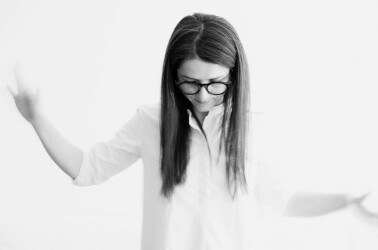 Born in 1979 in Romania, Alexandra Diaconu graduated from the University of Bucharest, where she studied Journalism and Communication Sciences. After a ten year career as a journalist working for several major Romanian newspapers and magazines, she moved to Vienna in late 2009. In 2010 she founded, together with her partner, an Austrian high-end men’s shoes brand for which she is now working as creative director.

To cope with the disconnection from her native language after immigrating to Austria, Diaconu stopped writing almost entirely and turned to visual images as means of expression. The photographs she takes are ultimately no valid record of reality but rather a trace of their 'fabrication' through the use of gestural moves that resemble wiping a blackboard anew and rewriting or drawing on it.

In her works, which finally appear as elaborate writings or drawings, Diaconu uses existing manmade artificial lights within the city’s limits or in between to explore the revealing character of photography and its power to record, destruct the common plain view, alter memory and space and recompose reality in a different visual form.

She lives and works in Vienna and in Bassano del Grappa.