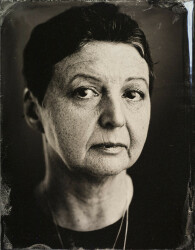 Yelena Zhavoronkova is a California based Fine Art Photographer and Graphic Designer. She received a Master’s degree in Industrial Design from the St. Petersburg Academy of Art and Industry, and has worked as a graphic designer for over three decades. Over the past few years, Yelena has been intensively studying and working in photography, which helps her to express her artistic vision. Yelena’s projects are simultaneously very personal and universal in nature, speaking to the viewers on an intimate level that is familiar to all. Since 2010 her projects were exhibited in de Young Museum of Arts, City Hall of San Francisco, RayKo Photo Center of San Francisco, Blue Sky Gallery of Portland and many other galleries around the United States and in Europe. Her works were published in the online edition of The New Yorker magazine, featured in Shutterbug magazine and Transformation literary journal.