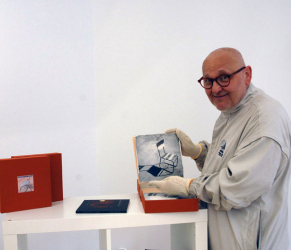 Born in 1955 in New Delhi (India). Since 1980 he is working as an independent visual artist. His works may be found in the Hungarian National Gallery, the Hungarian Museum of Photography and the First Hungarian Visions Collection, as well as in private collections in various countries in the world. Member of the Collective of Hungarian Creative Artists and the Hungarian Photographic Artists Association. He has participated in many exhibitions in Hungary and abroad. Graduated from high school in Budapest in 1973 he continued photographic and painting studies from 1973 to 1977. He is working in the field for 20 years. Continuously exhibiting since 1989. From 1987 he began to create and exhibit under the name Károly "Minyó" Szert, with a completely new approach, as a contemporary visual artist, on the boundary between photography and painting. Minyo lives and works in Budapest.