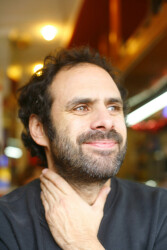 Ricardo Cases was born in Orihuela, Spain in 1971 and lives and works in Madrid. Ricardo Cases holds a degree in Journalism by the University of The Basque Country. His photographic work focuses on the yearnings of the human being: the deep and universal longings of the citizen of the mass society, fighting against banality in an effort to transcend, confronting his own dignity with a medium always untrustworthy. To this end, he turns his eye to expressions of contemporary folklore, looking for the truth of the Spaniard: a townsman who is forced to live in the city, in modernity. Beyond a pop appearance distant and cynical he is interested in what is human and anthropological. Beyond the social and documentary, he searches for the truthful and universal pulsations beating beneath the banal surface often kitsch and lacking glamour of contemporary Spain.